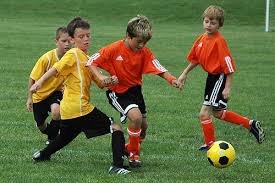 Futsal’s roots into youth soccer continue to grow and deepen in the East Bay. Ballistic United Soccer Club of Pleasanton and Mustang Soccer of Danville are large, respected USDA clubs in Northern California. Their adoption of futsal during the soccer season shows the value being placed on the sport. From u8 to u11, both clubs have replaced soccer trainings with futsal 1x per week. In the winter, both clubs have formed in house futsal programs to accommodate the increased interest. And both clubs are actively pursuing outdoor courts with city officials. In the U.S. futsal was once a quirky winter sport to keep players busy in the off season, but now many of the more ambitious coaches and clubs realize it’s a dynamic tool that enhances the soccer side.

In the words of u8-u11 Mustang Director of Coaching, John Kinnear, “Developmentally, we believe futsal really helps with quick decision making, movement off the ball and close ball control. This makes players better. They will enjoy the game and have fun at a higher level of play. By giving our youngest players a chance to develop these skills along with other soccer skills, it will lead to our overall goals of development, having fun and making kids want to play soccer and futsal for a long, long time.”